“By mercy and truth iniquity is purged: and by the fear of the Lord men depart from evil.” ~ Proverbs 16:6

The Bible often distinguishes iniquity from sin (and from transgression). For example:

“Keeping mercy for thousands, forgiving iniquity and transgression and sin…” ~ Exodus 34:7a

“…and pardon our iniquity and our sin, and take us for thine inheritance.” ~ Exodus 34:7b

“That thou enquirest after mine iniquity, and searchest after my sin?” ~ Job 10:6 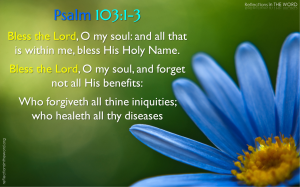 “We have sinned, and have committed iniquity, and have done wickedly, and have rebelled, even by departing from thy precepts and from thy judgments:” ~ Daniel 9:5

Therefore, while it is clear iniquity and sin are related, it is also clear that there is enough consequential difference for God’s Word to make note of it.

One helpful definition of iniquity is given in Samuel’s rebuke of Saul for his disobedience:

“For rebellion is as the sin of witchcraft, and stubbornness is as iniquity and idolatry. Because thou hast rejected the word of the Lord, he hath also rejected thee from being king.” ~ 1 Samuel 15:23

Also helpful is this phrase:

“…When a righteous man doth turn from his righteousness, and commit iniquity…” ~ Ezekiel 3:20a

Taken together, we see that the disease of iniquity is an attitude, a mindset, to go one’s own way instead of God’s way in some areas of one’s life. When a Believer is infected with the disease of iniquity there are parts of his/her life that are un-yielded to God. In these areas the Believer is so entangled by the sin that it is difficult to escape even though it has been confessed to God.

“I acknowledge my sin unto thee, and mine iniquity have I not hid. I said, I will confess my transgressions unto the Lord; and thou forgavest the iniquity of my sin. Selah.” ~ Psalm 32:5

Indeed, many of us at various times in our Christian journey have been trapped by a particular weakness, and struggle to break free from it because it became habitual: repeated over and over again. In Hebrews, it is referred to as “…the sin which doth so easily beset us…” (Hebrews 12:1). For some it might be pornography, for some gossiping, for some lying/deceitfulness/dishonesty, for some laziness, and so on: the list is long.

Yes, iniquity is a disease for which afflicted Believers desperately need a cure.

To help us understand, let us consider the following verses:

“Wherefore, O king, let my counsel be acceptable unto thee, and break off thy sins by righteousness, and thine iniquities by shewing mercy to the poor; if it may be a lengthening of thy tranquillity.” ~ Daniel 4:27

“He hath shewed thee, O man, what is good; and what doth the Lord require of thee, but to do justly, and to love mercy, and to walk humbly with thy God?” ~ Micah 6:8

“But go ye and learn what that meaneth, I will have mercy, and not sacrifice: for I am not come to call the righteous, but sinners to repentance.” ~ Matthew 9:13

In the passage from Daniel, showing mercy was the way in which the king could “break off” his “iniquities” and thereby could escape God’s impending judgment (Daniel 4). 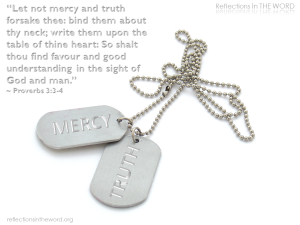 Thirdly, when the Pharisees criticized Jesus for fraternizing with the “publicans and sinners”, He responded by quoting a fascinating verse from Hosea (Hosea 6:6). In the quote, Jesus reminds them that what God wanted as a sign of repentance from iniquity/sin/transgression was mercy, not sacrifice.

In other words, in God’s kingdom showing mercy to your fellowmen is a surer indication of a heart change than any sacrificial offering. Why? Because mercifullness means we recognize that we are no stronger than our brother/sister is. It means that we realize that we are just as weak and prone to iniquity/sin/transgression as they are. And that any ability to resist the trap of sin comes from God’s sustaining grace.

When Jesus challenged the man without sin to cast the first stone at the woman caught in adultery (John 8:1-11), He was really asking the men if they were without need of mercy. Clearly, when they considered their sins they recognized they were not any better than the adulterous woman because they all, “being convicted by their own conscience”, walked away (John 8:9).

That is exactly what the first of the medicines in the prescription for iniquity is: To begin the purge of iniquity from our own lives we must first recognize that we are no better than anyone else. Any advantage, any goodness in our lives is there because of God’s grace alone.

Just like the king, we won’t get anywhere without first showing mercy. Indeed we must love showing mercy, because we identify with our brother’s plight. We know that any pit he has fallen in would have gotten us too, but for the grace of God which sustains us.

“Blessed are the merciful: for they shall obtain mercy.” ~ Matthew 5:7

Truth in The Bible is synonymous with God’s Word, i.e., The Bible itself. The Bible defines Truth as Jesus, Himself (John 14:6), and it defines Jesus as The Word (John 1:1-3). And it is referred to as the Word of Truth (2 Timothy 2:15). Moreover, that is what Jesus called it: 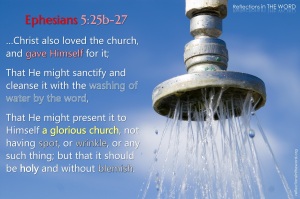 As The Word washes us, our minds are transformed as we conform to the stature of Christ instead of the effigy of the world.  And thereby our iniquity is removed.

Showing mercy to our fellowmen puts us in the position to start the purge of iniquity from our lives and The Truth, God’s Word, does the purging. It is by the humble study of God’s Word that we will be rid of iniquity.

Jesus put it this way:

“Then said Jesus… If ye continue in my word, then are ye my disciples indeed; and ye shall know the truth, and the truth shall make you free.” ~ John 8:31-32

Our verse closes by answering an underlying question: Why would anyone want to get better from the disease of iniquity (and its cousins sin and transgression)?

As doctors know too well, many people are not motivated to get better from their diseases. Many patients would rather live with (or die from) a disease rather than undergo grueling treatments or make uncomfortable lifestyle changes. They fear the cure more than they fear the disease.

This leaves each of us in a quandary, because our challenge is not how to get out of iniquity, for God has told us how: he has given us his prescription. Instead, our quandary is whether we really want to “depart from evil”.

How comfortable are you with your iniquity?

Do you/I really “fear the Lord”?